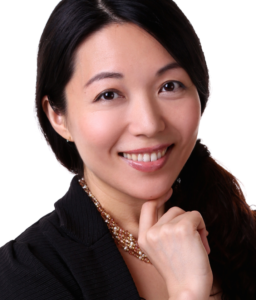 During her stay in Japan from 2010 to 2013, she studied coaching under the Olympic gold medalist mental coach Akio Hiramoto. With the motto to tap full potentials of individuals and organizations, she coached participants from many countries in company training called “Global Team Training” by ALC Education conducted by Kimberly Wiefling, an American instructor in the United States, Germany, Singapore and Japan. She has been touching lives of many clients and helps them transform their lives with coaching.

Returning to Singapore in 2013, she continued to support the development of global leaders in the Asia-Pacific region, mainly as a coach or/and simultaneous interpreter for incorporation of company and overseas expansion. Her clients are celebrities such as politicians, business owners, and talents in a wide range of industries including healthcare, IT, finance, real estate, chemical manufacturers, semiconductors, entertainment, media, and block chain. In the spring of 2020, she talked about global human resources playing active roles in the international community at the online course of “Introduction to International Business Communication” at Baiko Gakuin University.

In Japan, where the birthrate is extremely low and the population is aging, it is expected that bosses and subordinates will be foreign nationals. Her mission is to pass on the lessons learned in Singapore, a successful multinational state, to the next generation and business.

She graduated with a Bachelors of English Literature from Kobe College.